Saskatchewan: The Land of Living Skies and Lethal Racism 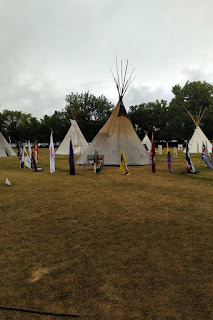 Saskatchewan is known as the “land of the living skies” for its breathtakingly colourful northern lights. It is also one of the most beautiful prairie-provinces in Canada, with stunning purple sand beaches and the incredible Sahara-like Athabasca Sand Dunes that stretch for nearly 100 kilometres. The province also boasts over 100,000 lakes and rivers, making it nearly 12% water. The diverse Indigenous Nations which have thrived on these territories since time immemorial have tied their customs, practices and traditions, and even their traditional Indigenous knowledge systems to the life-giving resources from these rich lands, waters and eco-systems. The very land that has sustained the Nehiyaw, Anishinabe and other Nations for thousands of years is firmly rooted in their identity as individuals, families, and Nations. Sadly, Saskatchewan is also well-known as one of the most racist provinces in Canada. With colonization and the clearing of the plains, came brutal acts of genocide, land dispossession and violent racism against First Nations – a legacy that has and continues to be a lethal reality for First Nations.

Saskatchewan is the home to farmer Gerald Stanley, who shot and killed an unarmed First Nation youth, Colten Boushie, in cold blood in 2016, but was found not guilty by an all-white jury two years later – a result that shocked the nation. But it’s not just white farmers killing Indigenous peoples – 62.5% of people who died from police encounters in Saskatchewan were Indigenous, despite being only 11% of the population. But this should not come as a shock to anyone. It wasn’t that long ago in 2004 that the Neil Stonechild Inquiry exposed the Saskatchewan police practice known as “Starlight Tours” to the world. Starlight Tours occur when police officers detain Indigenous youth, drive them out of town and leave them stranded in sub-zero temperatures causing their deaths. While this racist practice was well-known by First Nations as common practice, Canada had a hard time accepting the persistence, prevalence and lethal nature of racism in this country. Meanwhile, the rate of murdered and missing Indigenous women and girls continued to climb.

Racialized violence, abuse and neglect of First Nations is so ingrained in Saskatchewan that it is not only reflected in societal attitudes, but those of its governing bodies and agencies. Nowhere are the socio-economic conditions worse for First Nations than in the sister provinces of Manitoba and Saskatchewan. More than 80% of all children in care in Saskatchewan are Indigenous – second only to Manitoba’s 90% - primarily due to discriminatory agency practices or conditions of poverty from chronic and discriminatory government under-funding of core social services. Racism has a multiplier effect where not only are Indigenous children wrongly apprehended, but because of that race-based apprehension, they are less likely to get a high school education, and more likely to end up in youth corrections. More than 2/3 of all Indigenous peoples in prison were in the child welfare system. It should be no surprise then that Indigenous foster girls are also over-represented in murdered, missing, and sex trafficked and those exploited in the child porn industry. Human traffickers know exactly where to get them - foster and group homes.

These multiple, over-lapping crises rooted in racism and violence against Indigenous peoples is getting worse. The Supreme Court of Canada, the federal Office of the Correctional Investigator, the Auditor General, child welfare advocates, and numerous United Nations human rights bodies, together with countless research findings, commissions, inquiries and coroner’s reports all point to continued failures by federal and provincial governments to take concrete action to stem or reverse these crises. This failure, which is nothing less than colossal in Saskatchewan, sends the very toxic message to society that Indigenous lives have less value. Despite all the symbolism in a post-TRC report Canada, provinces like Saskatchewan have made very few substantive changes that have addressed any of these issues. All the political meetings, negotiation tables, and other so-called partnership initiatives haven’t stopped the suffering of the people – instead conditions are getting worse.

This is the reason that Idle No More was born. Not only did this organic social movement grew from Indigenous grassroots community members – it was inspired by federal and provincial government inaction on these social issues and their constant breach of our Aboriginal and treaty rights. Omnibus bills to remove protections for the many lakes and rivers which make up Saskatchewan, together with provincial leases, permits and other authorities for corporations to continue to steal from Indigenous lands helped inspire a Saskatchewan born, nationwide movement to demand action. Idle No More wasn’t the first public show of protest over racial injustice, and it won’t be the last. First Nation family members of lost loved ones organized the Justice for Our Stolen Children Camp to again raise awareness and demand action. Their message was simple - the gross injustices committed against First Nations peoples in the name of racism and misogyny, like poverty, homelessness, over-incarceration, over-representation of our children in foster care and murdered and missing Indigenous women and girls – are all getting worse, not better.

It would appear that Saskatchewan’s Premier is wholly detached from the problem. His focus seems to be on maximizing extraction of resources from First Nation lands; ignoring Aboriginal, treaty and lands rights; and clearing the legal playing field for more violence. In his recent Throne Speech, Moe announced that he will pass “trespass” legislation to allow more policing in “rural” areas. His focus is on the property rights of rural farmers without any mention for the safety of rural First Nation communities. We all know what this means. More laws to protect farmers who may hurt or kill other First Nations youth. His plan is eerily similar in nature to the bills proposed in the United States by certain states, to protect those (white people) who run over protesters with their cars, for example. Then add to Moe’s trespassing legislation, the fact that he is planning to arm conservation officers with AR-15 type carbine rifles! The very same conservation officers, who have recently been authorized to enter reserves through an MOU with the Federation of Sovereign Indigenous Nations (FSIN).

There is a political storm brewing in Saskatchewan that further risks the lives of First Nations people. Trespass legislation and semi-automatic weapons are the not answer. Land and resource transfers back to First Nations, ending discriminatory practices, implementing treaty rights - all of those would contribute to justice for First Nations. Pumping more weapons into First Nation territory will only lead to more deaths.

It is long past the time that the province of Saskatchewan take real steps to stem the race-based violence and deaths of First Nations from whose lands and waters every single resident of Saskatchewan benefits.