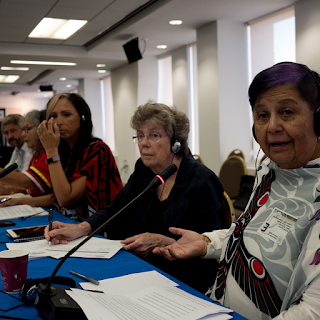 For decades, the families of murdered and missing Indigenous women and girls and their communities; together with Indigenous women leaders and experts and allied human rights organizations, advocated for government action to end the crisis. Many families had called for a national inquiry, which was supported by various international human rights treaty bodies. After a tumultuous start and numerous set-backs, the National Inquiry concluded its work and released its final report at a ceremony on June 3, 2019, before hundreds of Indigenous family members, leaders and advocates. They found Canada guilty of both historic and ongoing genocide.

Throughout the National Inquiry’s proceedings, Minister of Indigenous Affairs Carolyn Bennett committed that Canada would not sit idly by while the inquiry proceeded. They committed to take action to end the violence, which was well documented in numerous reports. Yet, they failed to act. Since the release of the final report, very little, if any substantive action has been taken by PM Trudeau’s Liberal government to end genocide against Indigenous women and girls in Canada.

The abuse, exploitation, violence, disappearances and murders of Indigenous women and girls continues unabated and represents the largest human rights crisis ever facing Canada. The National Inquiry confronted this reality head on when it concluded that Canada is guilty of genocide that is both race-based and one that has specifically targeted Indigenous women. They found that:

This finding was based on an independent legal analysis and the extensive evidence gathered during the inquiry. They further explained:

Canada’s colonial history provides ample evidence of the existence of a genocidal policy – a manifest pattern of similar conduct which reflects an intention to destroy Indigenous peoples.

What resulted from this finding was a media blitz of commentators engaging in debates as to whether the inquiry went too far; whether they were using the word to strategically to get attention; or whether anything other than the Holocaust could ever amount to genocide. Very few of those commentators had specifically worked in, were educated in, or conducted research on genocide; nor were most of them lawyers. Yet, these emotional or political reactions to the finding is what led the discussion versus the very pressing need for governments to take urgent action.

Even the United Nations High Commissioner Michelle Bachelet expressed great concern and called on Canada to examine this finding. Similarly, Luis Almagro who heads the Organization of American States, expressed his concern that Canada was too slow to act on the national inquiry’s findings. Meanwhile, some commentators reacted by saying that the inquiry’s finding should be investigated.  There is no utility in reinvestigating this finding. It is a legal finding based on fact and law. What was needed then and what is needed now is action to end the genocide.

None of this should come as a shock to government officials, Indigenous leaders, scholars and activists have long been calling Canada’s historic and ongoing treatment of Indigenous peoples genocide. Some have also highlighted the fact that sexualized genocide towards Indigenous women and girls has been an integral part of Canada’s violent colonization of Indigenous lands. While not a specific focus of Truth and Reconciliation Commission (TRC) investigation into residential schools, their final report also concluded that Canada’s actions towards Indigenous peoples amounted to cultural, physical and biological genocide: “part of a coherent policy to eliminate Aboriginal people as distinct peoples and to assimilate them into the Canadian mainstream against their will.”

The crime of genocide is a crime under international law that developed over time – even before the UN Convention on the Prevention and Punishment of the Crime of Genocide adopted in 1948. A state need only be guilty of one of the five ways to commit genocide against a racial group like Indigenous peoples, which include:

(1) killing;
(2) physical/mental harm;
(3) conditions of life to bring about destruction;
(4) preventing births; and
(5) the forced transfer of children.

Canada is guilty of all five.

The National inquiry, without excluding the possibility that individuals could be held liable for genocide in Canada, and duly noting that acts and omissions of provinces within Canada, draws a conclusion on the responsibility of Canada as a state for genocide under international law.

This genocide has been empowered by colonial structures, evidenced notably by the Indian Act, the Sixties scoop, residential schools and breaches of human and Indigenous rights, leading directly to the current increased rates of violence death and suicide in Indigenous populations.

The National Inquiry considered the following as examples of genocide:

- Deaths of Indigenous women and girls in police custody;
- Failure to protect them from exploitation and trafficking;
- Failure to protect them from known killers;
- Taking their children and placing in foster care at high rates;
- Physical, mental and sexual abuse in state institutions (residential schools, hospitals, prisons, etc);
- Denial of Indian status and band membership;
- Forced and/or coerced sterilizations; and
- Purposeful chronic underfunding of essential human services like food, water, health, housing.

These modern day examples discussed in the inquiry’s report would be in addition to earlier pre-meditated killings:

- small pox blankets,
- scalping bounties,
-mass murders of some native groups, like the Beothuk; and
- starvation policies and ethnic cleansing on the prairies.

When considering the testimonies of thousands of families, Indigenous women leaders, and advocates, as well as subject-matter experts, together with extensive legal, historical and social science research; the inquiry could come to no other conclusion but genocide.

Canada has displayed a continuous policy with shifting expressed motives but an ultimately steady intention, to destroy Indigenous peoples physically biologically and as social units.

All governments and state agencies are still active perpetrators and perpetuators of genocidal violence against Indigenous women and girls in Canada. Ending the genocide which is embedded in state institutions and society as a whole, will require immediate and urgent remedies that match the scope and character of these grave human rights violations – i.e. a comprehensive national action plan that is well-resourced and focusing on transitioning Canada out of genocide. That is no small feat. This will require external oversight but international human rights bodies or experts, with Indigenous women as core decision-makers.

Organizations like the Inter-American Commission on Human Rights (IACHR) have access to experts in genocide – experts who have worked with other countries to transition out of genocide. It makes no sense to ask the perpetrator of genocide to be the one to design the plan and implement the plan to get out of genocide. Indigenous women and human rights experts must be the ones to lead this process, together with international genocide experts to design this plan. Canadian officials must then work directly with Indigenous women and their Indigenous governments to oversee a fully- resourced transitional justice plan that is national in scope, applies to all levels of government and related agencies, and focuses on:

(1) ending ongoing genocide;
(2) reparations for harms done; and
(3) the prevention of future genocide.

This will require an Indigenous and human rights framework and gender-based analysis for all stages of the plan. While Canada promised the United Nations that it would come up with a national action plan by June 2020, few expect more than their standard action plan framework that tends to be overly general with no measurable outcomes. This is why several Indigenous women and human rights advocates attended the IACHR in the fall of 2019 to ask for international intervention and oversight. Canada’s response at the time was that they were too busy with the election. Then, they were too busy with holidays. June is several weeks away and in all likelihood, Indigenous women and girls will be left behind again.

Genocide is the worst crime and human rights violation that can be committed against a people. But you wouldn’t know it by looking at Canada’s lack of action on the crisis. Pipelines get more money and attention than Indigenous women and girls.

Here is my latest Youtube video talking about the need for a gendered covid-19 plan to take into account that Indigenous women and girls face not only the pandemic, but also ongoing genocide:
https://www.youtube.com/watch?v=mM6OBq1fo10